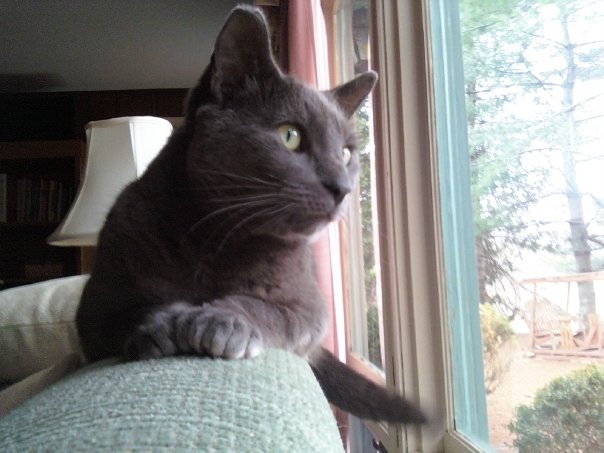 Happy Furry Friend Friday everyone!  Today I got to interview Stitch, our office is full of dog people so it’s not too often that I get to interview a cat, which made today’s blog extra exciting.  And yes he is named after the character from Lilo and Stitch, in case you were wondering.

So Stitch, what is your favorite way to spend the day?

Personally, I enjoy lounging around on the sofa near the back window and gazing up at the birds.  If I’m outside, I like to lay under the trees and watch them fly around above me, there’s something about them that I find so fascinating.  It’s pretty tempting to chase after them too and take part in all of their fun, unfortunately I’ve been slacking on my workouts and have put on a few pounds so I’m not as quick as I used to be.  Any time I try to catch up with them they’ve flown away before  I barely make a move!

Do you have a favorite toy or treat?

I used to be into toys when I was a kitten, but I’ve outgrown them at my age.  I’m not that big on treats either, usually I just humor my humans by eating them, but I really think they are contributing to my excess pudge around the middle.  Honestly, I’m not really interested in much, other than myself.  I’m a cat, what do you expect?

Do you have any fears?

My sister has a pet yorkie, named Rupert, I believe you have interviewed him as well, but he is not on my good side.  He makes me VERY nervous whenever he comes over, I typically try to keep my distance.  He’s only half my size, but I wouldn’t put anything past him, he is a dog after all.

Are you an indoor or outdoor cat?

I am free to come and go from my castle whenever I want, but if I want to go outside, I just need one of my servants to open the door.  When I’m out and about I don’t stray too far from home though.

Have you had any experiences where pet insurance might have come in handy?

Well it’s a funny story actually, when I was born my front leg was a bit crooked.  I was born on a farm and the woman who ran the farm thought that no one would want me because of my leg,  I guess you could say I was the runt of the litter.  Anyways, she told my sister that if no one adopted me they were planning on putting me to sleep!  I know, it would have been such a tragedy but that’s why my sister saved me!  She didn’t want me to be put down just because of my leg so she brought me home that day.  It turned out that my leg corrected itself over time, so I would have been put down for no reason!  Even though my leg turned out fine eventually, it would have been nice to get it checked out and see what was wrong.

Stitch is a lucky cat, he has been relatively healthy his whole life and his only issue ended up healing over time.  Not all pets are quite as lucky, which is why pet insurance is so important!  Give us a call at MassDrive and get a quote for your furry friend!