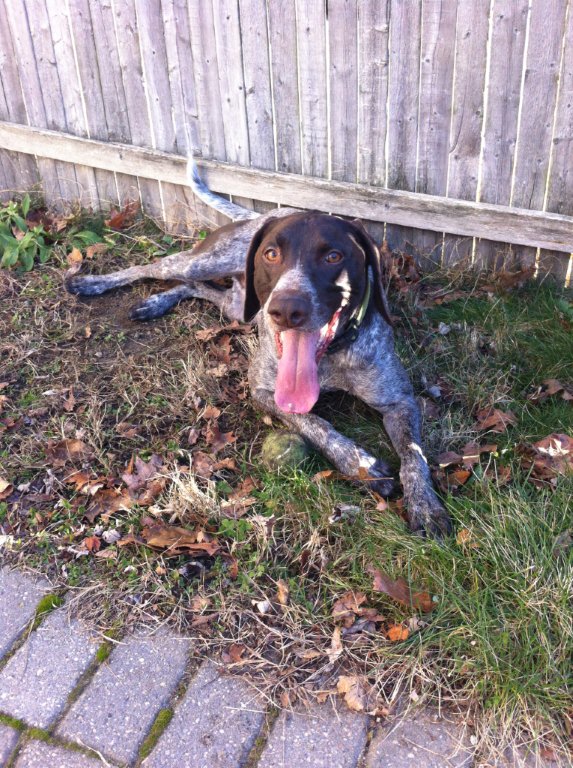 We’re back at it again and today I got to chat with Hank!  Is it just me or are dogs so much cuter when they have human names?  Hank has a very interesting story, not only was he a rescue dog, but he was also born in California.  Here in Massachusetts he has a very busy life with his family so I’m lucky he was able to squeeze in this interview!

So Hank, what would you say you love to do most during the day?

Well, as a California native I love the sun, as you can imagine.  I could stay in my backyard all day and alternate between sunbathing, fetch, and chasing any squirrel that dares cross my path.  As a German Shorthaired Pointer, I am a bird dog which means I LOVE to chase birds, squirrels and any other small animal that I may see so that keeps me pretty entertained.  However, I don’t mind the winter because I also love snow.   I get so excited when it’s snowing out, there’s nothing better than running around in it before diving into a snow bank and making a snow angel!

Do you have a favorite toy?

Definitely my tennis ball!  I love to play fetch and could chase that thing for hours on end.  I use it a lot so it’s pretty beat-up but it never fails to entertain me.

Is there anything that you’re afraid of?

Well, I like to think I’m pretty tough but the one thing that gets to me is the water.  I’ve just never been a fan which is very unusual for dogs of my breed.  Although I did brave the water just once; it was to swim after a catfish I saw in Lake Winnipesaukee!  I guess I just can’t resist the chase and my instincts got the better of me, but even though I was scared, I almost caught him!

Where is your favorite place to go for a walk?

Back in California we used to go to the Pulgas River Reserve, that is my absolute favorite spot in the whole world to explore!  Out here in Massachusetts I like to go into the city because there are so many different things for me to smell!  The ocean, hotdogs, people, some trash now and then, you name it I’ve smelled it.  I also enjoy heading over to the Middlesex Fells Reservation, it’s near our house now and is a great spot for me to get in touch with nature.

Do you have any health concerns?

Well I’ve never had anything too serious happen to me other than a few scrapes and some minor health issues.  I had a decaying tooth removed once and cut my leg once when I was playing so I needed some staples in my leg.  Those are the worst things that have happened to me so I guess you could say I’ve been pretty lucky. My parents lucked out too because they’ve had pet insurance for me since they got me so nearly everything was covered!

Although he hasn’t had any serious injuries, Hank is a very playful dog which has resulted in a few bumps and bruises.  What dog doesn’t love to run around their yard and play?   You never know when they could scrape themselves or even accidentally break a bone.  Vet bills for such injuries can really add up, especially if your pet needs x-rays!  Give us a call at MassDrive today for a pet insurance quote, there’s no better feeling than knowing your best furry friends are protected!