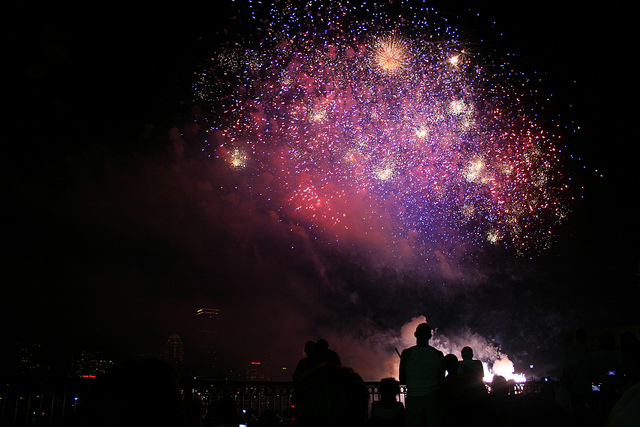 Fourth of July is right around the corner and it looks like we’re finally going to get some sunshine just in time!  This is one of the biggest holiday weekends of the year and there are plenty of celebrations going on all across the state.  Whether you’re celebrating with family, friends, or both, we’ve found the best places to spend the Fourth in the Bay State!

Boston – This is definitely one of the most popular spots in the state to celebrate the Fourth, there will be dozens of events going on across the city beginning  tonight with the kickoff of Boston Harborfest! On the Fourth kick off your morning at the Flag Raising Ceremony and Parade beginning at 9 AM at City Hall Plaza.  Other events include dozens of pub crawls including the Red White and Brew PubCrawl  starting at 5 PM at Mija Cantina Bar in Faneuil Hall.  Of course the main event is the Fourth of July Concert on the Esplanade beginning at 7:30 PM.  Keith Lockhart will be conducting the Boston Pops at this Fourth of July tradition.  The concert will conclude with a spectacular fireworks show above the Boston skyline.  For a full listing of Boston Harborfest events click here.

Hingham – Head to the south shore this year for the Fourth if you’re looking for a laid back day with the family.  The celebration kicks off at 7 AM with the Annual Fourth of July Road Race and a Pancake Breakfast hosted by the Kiwanis and Lions Clubs taking place from 7 AM – 10 AM.  At 10 AM make sure you get a good spot to watch the Fourth of July Parade beginning at Hingham High School.  This year’s theme is “Stars and Stripes Forever”.  On Saturday, July 6th the Independence Day Party is a big hit with kids and kicks off at 3 PM until 6 PM and is followed by live music and fireworks over Hingham Harbor.

The Berkshires – If you’re out in Western Massachusetts for the Fourth there are lots of events to keep you entertained.  The Pittsfield 4th of July Hometown Parade is the largest Fourth of July parade in New England, it kicks off at 10 AM and this year’s theme is “America the Beautiful: Land That I Love”.  Later in the day, stop by Shakespeare & Company in Lenox, for a la carte pricing at an outdoor all-American BBQ with burgers, hotdogs, corn on the cob, beverages, beer, and wine.  This event runs from 1:30 PM – 5 PM.   At Rose Meadow there will be a reading of the Declaration of Independence at 3 PM by Company actors.  In Williamstown the annual parade begins at 11 AM and at the end of the route, parade-goers will be treated to a free BBQ!  After the BBQ head over to the Williams College Museum of Art where visiting actors will conduct a reading of the Declaration of Independence.  Afterwards, drive to North Adams where at 6:30 PM the North Adams Steeplecats play the Stanford Mariners at Joe Wolf Stadium immediately followed by fireworks!

Nantucket – Spend the Fourth at the beach this year and enjoy the many activities this island has to offer!  Of course the beach will be a popular spot for all visitors and Main St will be bustling with activities!  Beginning with the singing of the National Anthem at 9:45 AM, the morning continues with a watermelon eating contest, pie eating contest, dunk tank, face painting, puppet show, and much more!  Don’t miss the water fight between town firefighters at 11:45 AM, be sure to bring your umbrellas!  From 5 PM – 6 PM children ages 6-12 are invited to participate in running races, potato sack races, three-legged races, wheel barrow races, and tug-of-war!  Fireworks begin at 9 PM on Jetties Beach and this year they will be synchronized to music so be sure to bring your radios and tune into 97.7 FM WACK.

Where do you plan on spending the Fourth of July?  Whether you end up in one of these hot spots or not, be sure you’re staying safe this holiday weekend and if you do plan on drinking be sure to designate a driver to get you home safely!